Usually when we induct a Pooke Hall of Famer, it’s a shocking revelation. Mostly because it means we’ve recalled to update the site. Make no mistake about it though! As far as I am concerned, there is no greater honor and dignity that can be given to a person or in this case, an arguably shitty Italian film about sex murders. Yes, ladies and gentleman, I give you the newest Pooke Legend, who’s memory is forever written in the sky of the eternal vision. (Author’s Note: Inaugural Hall of Famer, The Ultimate Warrior, helped me with that last sentence) I give you…1973’s giallo masterpiece Torso! 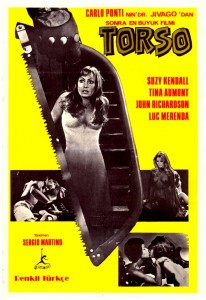 Now let’s get one thing straight: As previously stated, I am not entirely sure Torso is a genuinely good movie. What it lacks in true quality, it makes up for in batshit insanity, endless sexism driven cruelty and more red herrings than…some…thing with…a lot of red herrings. Mmmhmm.

A few beautiful points about this classy piece of trash:

– First off, that name. TORSO. It’s evocative, grizzly and generally sets the tone for some carnage. The best part? THAT’S NOT EVEN THE BEST NAME THE FILM GOES BY. It’s homeland name is “The Bodies Bear Traces of Carnal Violence” It’s probably best they didn’t go with that name for an American release because nothing could ever live up to it outside of Mothra playing a feisty black bailiff on Night Court.

– The film’s primary group is a bunch of college aged girls and my Goodness, they are easy on the eyes. Like leagues above the usual cannon fodder one would find in say “Urban Legend 5: The Hunt for Jeremy Irons” And then on top of that, you then get to watch them be brutally killed and molested in death. What do you mean that’s not a positive? Sorry, you uptight QUAKER. Ohhhhh Colonial Burrrrrn. 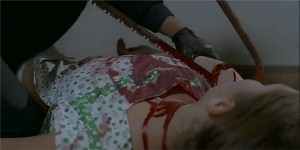 – I am actually shorting the film on it’s quality. Some of the genuinely creepy, inventive shots would start showing up a few years later stateside in stuff like Black Christmas and Carpenter’s Halloween. The influence is very noticeable and I for one was thrilled by it.

– Speaking of the shots, director Sergio Martino actually does a pretty fucking amazing job here. From the beautiful open piazzas and fountains at the college, to the desolate creepy muddy woods he utilizes later, this thing has some real visual style and beautiful locations to compliment it. Mmm, pretentious complimenting, I love it.

– For no reason, the movie kills a retarded person. Laugh out loud.

– In any other movie, this would be the true highlight of the entire picture. It’s gotta settle for second here, but I will share it with you. The final girl is locked in a room. The killer hasn’t seen her yet so she has the opportunity to sneak out. The key is of course in the lock on the other side. She decides to go with the “Put a newspaper under the door, jiggle the key loose onto said newspaper and pull it back through” trick. The key misses, but our heroine doesn’t realize it yet. She takes a moment of silence to hear if the killer has noticed the slight commotion. While she’s doing this, we have a shot of the key laying beside the paper. And a skin crawlingly calm gloved hand comes into the shot and gently sets the key onto the paper for her. She is of course ecstastic when she pulls the key back through and then…well awful shit happens of course. I am so not doing it justice here, but her being filled with overpowering joy while you the viewer know she’s still fucked is a great trick.

– The true highlight of the film, you ask? Why of course, our hero getting into a knock down drag out brawl with the killer and in the middle of all this mind boggling horror, he decides to unleash nature’s deadliest weapon: Bob Holly’s standing dropkick. He fucking nails it of course.

Overall, Torso is a masterpiece of suspense, excellent location shoots and pointless cruelty. Christ, the movie is so endlessly entertaining, I didn’t even get to the pointless gratuitous lesbian scene or the red scarf plot point. You heard me! RED SCARVES! So yes Torso, you can walk that aisle as a legend. You have truly earned it. 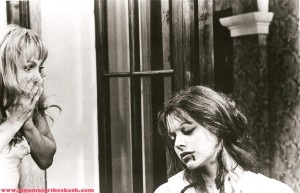