KING GHIDORAH!! Yes, he is a previous winner, but he didn’t get much of a write up. Now we right humanities wrongs in this respect. Anyways, who are you to deny great and powerful Ghidrah his rightful spot atop the kaiju mountain? Hm? You’re NOBODY to him. An ant! 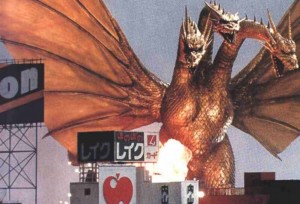 Also, please try to ignore me spelling Great and Powerful Three Headed Ruler’s name multiple different ways. I still can’t decide on which one I like best, so I just kind of go with whichever strikes me as prettiest at the time. Yes, most people of my age worry about feeding their children, paying the electric or pleasing their wives. Fools. What about your internal debate about how to spell a 50 year old Kaiju character’s name?! Won’t you let yourself live?!

Ghidorah first debuted in “Ghidorah! The Three Headed Monster!” which is known in Japan “Three Giant Monsters: Greatest Decisive Battle on Earth!” and no that’s not a joke sadly. This was still during Godzilla’s initial villain era and for no apparent reason, he and Rodan were kicking the shit out of each other over what probably amounts to the monster equivalent of a woman. Mothra was doing her usual bitchy schtick by breaking them up for peace and the fact that a giant 3 headed space dragon has emerged and is generally wrecking shit. After a fierce battle, Ghidrah is driven off by the 3 monsters back into space.

Really fun movie. It takes the top 3 Kaijus in all the land to run off Ghidrah and even then, it’s after he’s properly fucked all of them up substantially.

In his follow up appearance, Ghidrah challenges Rodan and Godzilla again in Invasion of the Astro Monster. In a somewhat shocking and debateable conclusion, Ghidrah actually manages to semi defeat his 2 adversaries then high tails it back to space. A powerful moment.

Big Ghid did some other shit in his career too, but these 2 helped properly establish the beast. Not even Godzilla could defeat the bastard without help. Well if you ignore 1991’s Godzilla vs King Ghidorah where Big G decapitates the middle head and chunks him into the ocean. But yeah, you get my point.

Ghidorah would return time and time again throughout life, each time big as life and twice as ugly. He had a brief hero run i nthe mid 90’s set, but no one wanted to see a Kaiju whos homeland nickname is “The King of Terror” saving babies, so he quickly returned to his bastardly ways. 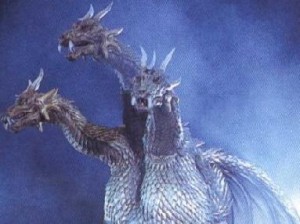 Ghidrah was also routinely mind controlled by aliens to do their bidding, with the best part being that without mind control, he was an even bigger asshole. This defines Ghidrah well as he is just always pointlessly enraged at everything and holds the crown as most pissed off Kaiju. I’ve also always loved how exasperated Godzilla is by him. When The King makes a run in during Godzilla vs Gigan, Godzilla basically gives him a “Oh Jesus, THIS asshole again?!” reaction and then all hell breaks loose.

Another great Ghidorah moment, you ask? Sure! Glad you asked. In 1998’s Rebirth of Mothra 3, Ghidorah originally came to Earth millions of years ago…and wait for it…wait for it…IS RESPONSIBLE FOR THE EXTINCTION OF ALL DINOSAURS. Yes, fucking King Ghidrah has been alive forever and has just been randomly killing the shit out of things for millions upon millions of years. In present time, he has become his greatest entity, Grand King Ghidorah and Mothra cannot defeat him. So Mothra GOES BACK IN TIME to fight the original weaker version of Ghidorah. There are no words people, there are no words

And now we end the article with my favorite Ghidrah moment. The film “Destroy All Monsters” features all of Earth’s beasts being mind controlled by aliens and ordered to destroy large cities all over the world. The spell is of course broken and the aliens are fucked. Their final desperate plea? Unleashing their King, the almighty Ghidorah. A few cuts of the film actually explicitly state that Ghidorah is an ally to them and not under any sort of mind altering. What does this mean? That King Ghidorah sees 10 angry monsters looking for a fight in his completely right mind…and he absolutely charges right into them like Stone Cold Steve Austin attacking a shitty WCW-ECW Alliance. Ghidorah of course gets his ass beaten severely and possibly killed, but not after badly wounding the members of the group.

I still have no idea how one doesn’t cheer for Ghidrah by the end of that thing and it basically sums up the big mean jack-off in full. Is he evil? Yes. Lots of Kaijus are evil though. Ghidorah? He’s royalty AND a jerk on top of it all. And that’s why he will always be my favorite, the ultimate heel, the great and powerful King Ghodrah. 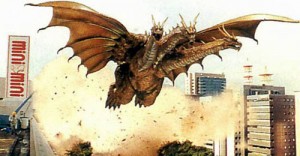