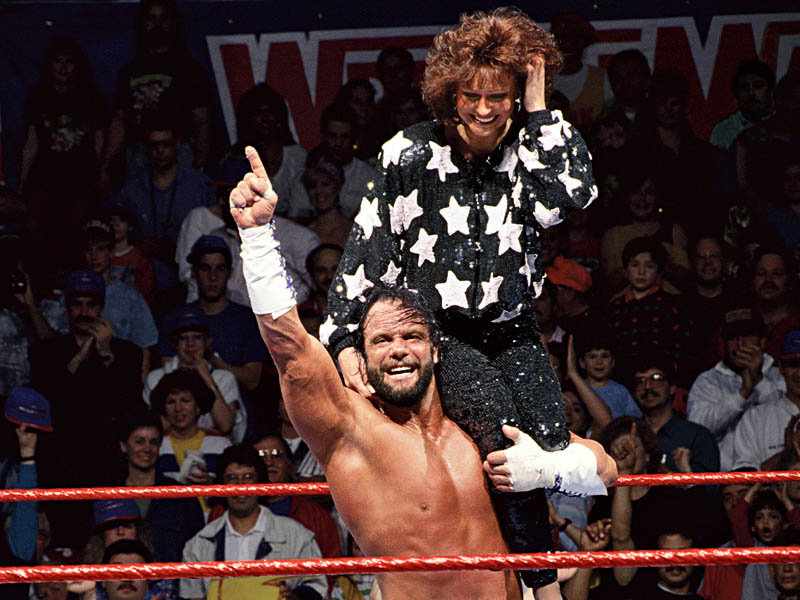 Wrestling is an awful thing to love. Not only will you be mocked for the duration of your life for this interest, the guys you cheer for are usually a little less than Saints. The pinnacle of my blind adulation for the “sport” was of course those blissful early years of my life. My young eyes widened with excitement from let’s say 1988 to 1998 or so. After the fact, I still loved it, but not in the same way. That’s the thing about maturing, you change. The business was always in my blood though and I to this day cannot shake it completely. I tried to because after guys I legitimately considered heroes started dropping dead from suicide or drug abuse or God knows what else, it just wasn’t fun anymore. Chris Benoit is the most drastic example. Loved the guy. And then…yeah.

Just sitting back and reading a bit of what I typed is embarrassing on some level. Calling men in spandex who fake fight “heroes” is probably completely ridiculous to most people and I understand that, but just let me have it. It meant a lot to 8 year old me when the Big Bossman twirled the nightstick, it meant a lot to 8 year old me when the Ultimate Warrior tore like a bat out of hell down the entrance way and it meant a lot to 8 year old me when Jake the Snake DDTed someone suddenly and out of nowhere. That thing about maturing I said? It’s true, you do change. But the things you loved as a kid, the Perfect necksnaps, the Santana flying forearms, they linger. They won’t leave you alone even though all logic and social decency says you should put it away for good. You can’t though. Eventually you just don’t care if someone knows you thought the Road Warriors were the greatest thing in the world and you maybe even wear it like a badge of honor. “God dammit, look at these assholes with all their goofy tattoos and generic personalities. IN MY DAY, MEN WORE FACEPAINT, HAD MANAGERS AND SUCKED DOWN WHISKEY LIKE WATER. AND I LOVED IT. I FUCKING LOVED IT. CAPS…LOCK.

I still had a strong attachment to the Benoits and Eddys of the world as an adult, but that all went tragically to the deepest parts of hell. I just gave up. My thought process was basically this: These guys are all walking death sentences. Why even care? Why even try?

So yes, I was firmly in the “Nothing can shock me anymore” camp of jaded smarky older fans who think Randy Orton fucking sucks. And then you lose a guy of Randy Savage’s stature and my jaded gimmick falls apart like a Billy Gunn main event push. I’m not jaded when one of the guys, MY guys goes. I’m just sad.

Don’t get me wrong, I’m not nearly as hurt as the people who knew and loved the Macho Man, but it definitely had me sitting and staring at the floor for a minute. He was never a huge favorite of mine as a kid, frankly, he scared the shit out of me. But like I said, he was one of mine. That group of characters from say 89 to 93 that were so vital to me and my bad little kid bowl cut. I hated Jim Duggan and never had a minute of fondness for ol’ Hacksaw, but when he goes, I will be sad. He is part of a special club that I watched endlessly on old Coliseum video tapes and they will always be special to me. The Macho Man is right at the front of that.

I will just tell you the basic point of this entire thing: I try to not care about this ridiculous wrestling shit anymore. Then a guy like Savage goes and I remember vividly why I can never stop caring fully. I would never want to lose something that used to make me so happy.

Randy Savage played a huge part in that happiness. When I hated him as he dropped 5 fucking elbows on the Ultimate Warrior’s chest, even then I remember thinking “I will remember this forever.” When he held the ropes open (FUCKING FINALLY) for Miss Elizabeth, I remember thinking “The Macho Man is kind of a nice guy I think. Huh. ” When his number was drawn for the 1992 Royal Rumble and he made a god damn beeline for Jake The Snake Roberts (the man who had ruined his wedding), I remember thinking “THE MADNESS IS LOOSE OH MY GOD”. Hell, even when I got older and smartened up to the business, I remember watching Savage vs. Steamboat at WM 3 and saying to myself “Jesus…Randy is REALLY good. What the hell was wrong with 8 year old me?”

I have missed Randy for a long time now. He’s been essentially out of the business for a decade and yet sometimes I randomly flash to him DARTING to the top rope and driving that elbow home. Always after raising both arms above his head of course. Oh yeah, that sweet “grab the guy’s hair and jump over the top to the floor causing his neck to snap off the ropes” move. Oh and the way he’d point at a guy, talk some smack, and then extend both arms to his side, his fingers twiddling in the air. Oh God! His voice! How did I go so long without mentioning his voice?

I could sit and think of things all day that I remember about Savage. And that’s why you got to just let me love the goofy wrestling shit of my youth. It mattered and so did Randy Savage.