Splice was dead in the water before it even got a chance to swim/mutate and develop gills so as to avoid drowning. A bizarre concept combined with an awful marketing campaign destined the movie to go down in violent flames and that it did, nearly taking Adrien Brody’s super nose with it. It’s an unfortunate occurrence too, because the flick actually has some really good ideas working for it that most people didn’t even know were gonna be in play thanks to the commercial and poster work. Let’s go the quick and pointless route.

– “Hey, didn’t I already see and somewhat enjoy “Species”? Yes you did and the marketing gave you no reason to think this was anything different. Quick shots of something killing someone violently within the commercial! Poster featuring a sexy alien like seductress! Minor yet respected actors slumming it in a monster movie! Oy. The film has very little in common with Species as Dren, our lovely lab created super beast, is really just a sweet, caring hyper intelligent mute and confused little girl, not a sexed up mating machine. Sex does become an issue later, but it’s done in a more unnerving and disturbing fashion than Species ever used it. But yeah, basically where Species was an excused to have some sweet gore effects and a bunch of blood splattered Natasha Henstridge breasts, Splice falls firmly into an allegory about what it is like to raise a child. Ya know, if your kid was constantly mutating and becoming more and more independently pissed off.

– The film really isn’t particularly horrific and it never tries to be. It mostly focuses on Dren’s inability to understand what the hell is going on in her small little world and Sarah Polley and Adrien Brody as her surrogate parents trying to love and support their somewhat monstrous daughter. The film is touching in it’s way, with Dren mostly just wanting acceptance and to be allowed to live outside the 2 prisons she inhabits in the film. Not to spill blood or wreck havoc, but to simply play. You never dislike Dren and that’s a good thing.

– Adrien Brody is okay in the film, which is surprising as I usually love his work. They also went out of their way to show how hip his character is with obnoxious clothes and random usages of wacky anime art. What a quirky fella! Shitty shit is shitty. Sarah Polley on the other hand is wonderful as what is an initially loving mother who is shoved violently into the role of somewhat unhinged revenge seeking damaged super bitch. When you see why she goes this route, you simultaneously side with and abhor her. Good work Sarah.

– The effects work is spectacular as scant CGI work is worked in with excellent puppet and make up effects. Dren’s teenage form, the one primarily focused on, is both very pretty and completely lethal looking. The final form though? What a fucking great monster. It’s strange, deadly and completely wonderful looking.

The film does have it’s short comings, (the aforementioned Brody hip attempts, a few clunky lines of dialogue and too little screen time for the final monster Dren becomes), but overall I found it a smart, strangely sweet film that took a lot of the Frankenstein myth and shoved it together with Cronenberg’s the Fly and threw some ideas of it’s own into the pot to make a pretty satisfying experience.

Also, yes you do get to see Dren fuck. 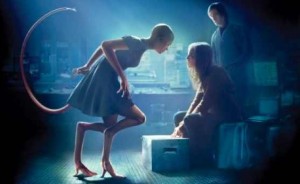