Title says it all. I am doing this for no particular reason. Let’s make it a consistent feature from now on. Okay? Okay. 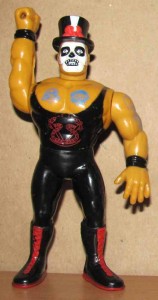 Our commentators are Vince Mcmahon and Mr. Perfect. Dale Wolfe is already in the ring and despite his pretty impressive mullet, Mr. Wolfe may be one of the most unspectacular looking jobbers of the 90’s. And out comes Papa Shango. Lots of shots of children looking absolutely horrified. Ya know, if they hadn’t called him Papa Shango and incorporated so much actual use of “voodoo”, I think the character could’ve had a longer run. Big Charles Wright certainly looks formidable in the get up anyways. Unintentional comedy by an announcer interrupts my thought process sadly.

Vinnie Mac: What’d he do, kiss the bones or smell them!? I don’t know what he was doing.

Oh this is Papa Shango’s WWF debut according to Vince. I never see him brought up in duscussion, but Hennig is a pretty good color man. Good voice for it. On that note, here’s this exchange.

Mr. Perfect: You know where this man is from, Mcmahon?

Hey Jameson is in the crowd. Do you remember Jameson? Not the Irish whiskey, the Revenge of the Nerds ripoff who is probably currently killing himself with Irish whiskey.

Vince is talking about voodoo having roots in Haiti and Louisiana so Shango might be from there as a result. Well that was a nice try, anyway.

Shango with lots of clubbing forearms and general shitty big man offense. Sloppy backbreaker. And then Shango just goes ahead and finishes with his inverted shoulder breaker. That move owns, but just looked like complete crap here. Charles wasn’t what you would call “good” at this point, a zenith he never really reached I guess. Hennig cracks me up by wondering what “Mama Shango” looks like. Post match, Papa walks around the ring, says “Mumba” and laughs a lot. Okie dokie. 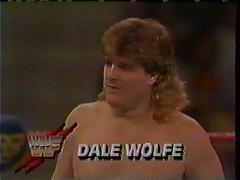 Oh sweet, our commentators are Gorilla Monsoon and Bobby Heenan. Todd Overbow is already in the ring. If you were pasty and had a mullet in the early 90’s, did the WWF just search you out so a bigger name could kick the shit out of you? Absolutely no excuse for Overbow and Wolfe not forming the droopiest body having tag team of all time.

Here comes Papa Shango. Children fear him. Can’t say as I blame them, if I saw Wright in any of his gimmicks coming towards me, I’d ruin my striped English boxer shorts that I have imported from Malaysia.

Bobby Heenan: His fingernails are black!

Gorilla: So’s the rest of him!

Indeed! Match starts with some clubbering. Oh hey, Shango has his smoking skull now. That’s good. Irish whip and Shango shocks me and everyone else in the history of creation by hitting a pretty nice standing dropkick. What the hell!? 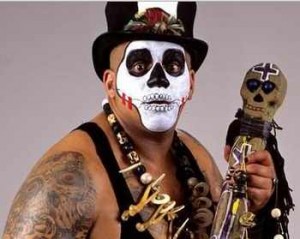 Neck vice and some knees to the back. Gorilla and Bobby both sound suicidal via boredom. Some sort of flying neck chop or whatever the fuck that was. Shango is bored too, so he goes to the finish. NASTY shoulder breaker this time, as Heenan really enjoyed the near jobber murder. Post match, Shango get’s his big smoking voodoo stick and drives it into Overbow’s throat. You just don’t get to type sentences like that when watching other forms of entertainment. “He harpooned him!” says Bobby. Yes he did!
Brian Brieger is already in the ring. He Looks like he’d play the 3rd lead in a really bad mobster film and his name would be “Tony Meat Balls” or something. I don’t know.

Vince and Mr. Perfect are back as our commentators now. Oh no, they’re discussing the “curse” Shango put on The Ultimate Warrior. I always forget how much they pushed the unproven big man right out of the gate. It…did not go well. Luckily, Vince learned his lesson and never overpushed a guy as soon as he got into the company just based on his size ever again. Yep. That never happened again.

The joke is that he still does this and will probably do it till his heart finally explodes. There. Do you get it now? DO YOU?

Shango shoots off a little fire and the lights go out. This isn’t going to pay off well unless they come back on and Sabu puts most of the 1st row through a table. And suddenly, flames light up the dark. The lights come back on. I will let Vince tell you the rest.

Vince: HIS OPPONENT’S FEET…ARE ON FIRE!

Brian is unconscious and seems to have melted black licorice spewed all over his face. Shango’s laugh in the background is hilarious. Note to future villains: Never go “MWAHAHAHAHA…MWAAHAHAHAHA…MWAAAAAAAAAHAHAHAHA” to convince people you are evil.
Vince just called Brieger “Brian Cougar.” I miss this Vince. Shango gyrates like Rihanna some more.

Vince: It just boggles the mind! That this man…has that kind of powers!

Couldn’t have said it better myself. Papa Shango didn’t last too much longer than his Warrior feud, but don’t fret. Things would get better for Charles Wright. 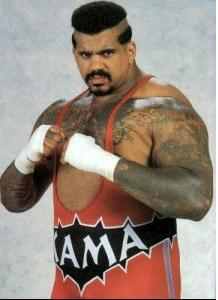