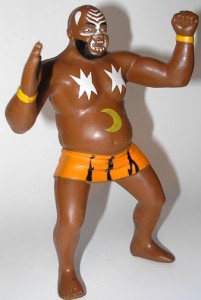 We start out with Harvey Wippleman. God, was there any more unsuccessful manager in the history of this great sport than Harvey? His guys always sucked. Harvey introduces a man feared the world over, KAMALA.

Kamala is out in big wacky yet somewhat amazing mask with Kim Chee at his side. I always wanted Kim Chee’s mask and hat combo as a kid.

Kamala is being challenged by the legendary Dale Wolfe. Dale got good money for a lot of the 90’s by getting the shit beat out of him apparently. Why didn’t Vinnie Mac just team up Papa Shango and Kamala? Because I can’t think of many things I would enjoy more than their batshit insane combo entrance.

Oh yeah, our commentators are Vince and Mr. Perfect. Lock up and Vince notes that he doesn’t think Kamala even knows what a “lock up” is despite just doing one. He then transitions into talking about quote “a man who knows a lot about lock ups, Nailz.” THAT is some fine commentary right there. Kamala is using various head butts and chops to slow down the human onslaught that is Dale Wolfe. Spare him, Dale! He has a family, dammit! Oh man, Fun with Commentator time.

Vince: Get this man off of him! He’s a savage for crying out loud!

Vince: Well…what does that mean?

Mr Perfect: He’s from the Dark Jungle! That’s where savages come from!

Vince: Well certainly not everyone from Uganda is a savage…

Oh Hennig, you bigot. Kamala drapes Wolfe across the ropes and then rubs his nuts on his back to soften him up for something. Throat chop. Big fat ass running splash to the back, but sadly Kamala can’t figure out how to make a pin. Oh wait, no, he’s got it. That gets the 3. Vince compares Kamala to a giant black lion. Oy. 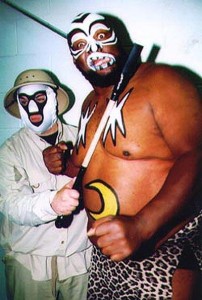 Harvey Wippleman intros the big man again, this time with some build for his feud with The Fink. Good Lord, there’s something I totally and completely blocked out. “Wippleman will take his head off!” yells Perfect.

Vince and Perfect are back for this one. Our victim is one Steve Gillespie. Get em, Steve!

Vince and Mr. Perfect are hyping up Kamala and Undertaker’s casket match at Survivor Series. How many fat people has the Undertaker killed in his career, anyway!?

Kamala starts out with his usual barrage of chops and stomping. I have a sinking suspicion that Kamala was not the ring general I remembered. He does hit an actual move with the hot shot. “Talk about a squash!” says Perfect. Well they’re not trying to hide it anyway.

Choke slam and a sort of super kick kills Gillespie dead. Big splash to the back and Kamala hooks the leg into Steve’s lower back going for the pin. Oh, Kamala! He finally figures it out and gets the 3 count.

Welp, let’s get to the torturous part of our evening…
We’re in WCW now and out comes the tag team of The Shark and Kamala with manager Kevin Sullivan. This was right in the middle of the Dungeon of Doom angle that nearly destroyed American and human decency as we know it.

Our commentators are some guy I can’t make out, Larry Zbysko and…The American Dream, Dusty Rhodes. Looks like I picked the wrong week to stop sniffin’ glue. Fun with Commentator time!

Dusty: I tell ya what baby! Look at that big ol’ shark tooth done round his neck! I’d love to see the shark that was attached to that thing! But let me tell ya, ain’t no one more eviler than The Taskmasker!

Dusty: Eviler! The Taskmaster has put together some awesome powers here in Kamala…And the Shark!

Tom Torres and Terry Morgan. God, even the jobbers in WCW were noticeably shittier.

The Shark starts us off by wailing on one of these assholes and Dusty notes “There is no mystery communication goin’ right now!” He was trying to say “miscommunication.” I am going to need Aspirin.

Lots of clubbing forearms from The Shark. Corner clothesline and body slam. Kamala is off the apron as he does not understand the rules of a tag match. Hehe. HAHAHA. Kudos to Kamala, he at least played his role well. Sullivan yells “Hulkamania” a lot and this somehow focuses Kamala. I dunno.
Kamala beats the shit out of Jobber 1 for a bit then chunks him into the corner so he can tag out. Headbutts for our new jobber. Corner choke plus Kamala rubs his breasts on the other fellows neck. God. Body slam and back splash. Kamala goes ahead and tags out to The Shark.

Larry: That may have just been a parting of the waves for the Shark.

Shark finishes with some sort of running clothesline thing. And after the match, Paul Wight stands up in the audience. There ya go.

So yeah, Kamala wasn’t what you’d call “good” but he’s been playing the character for over 20 years now and he’s got the thing down cold. He also will probably be a Hall of Fame inductee at some point. Kamala’s life has been a lot better than yours.