Jorge Gonzalez was enormously tall. And that’s all it took to get his foot in the door as one of pro wrestling’s greatest freak shows. Standing 7 feet 7 inches tall, but billed as well over 8ft, El Gigante was not exactly a technical wonder. A former basketball player, Ted Turner’s WCW encouraged him to pursue a life in the wrestling business with their company. The training was…scant at best. They didn’t need the big man to have 5 star classics, they needed him to be tall and to body slam Ric Flair a lot. And he did. His greatest triumph was probably beating Sid Vicious in a stretcher match, a battle that is so overwhelmingly unwatchable that I briefly went into a coma trying to get through it. 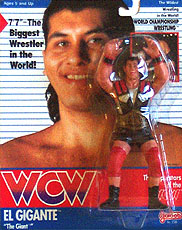 For no apparent reason, El Gigante moved to the WWF in early 1993. He debuted at the 1993 Royal Rumble with Harvey Wippleman, a future WWF Women’s Champ in his own right. He beat down the unstoppable Undertaker and caused his elimination during the Rumble match itself, leading to a series of matches. We shall not speak of them out of respect for the dead. (They were abortions upon the so called sport) This new heel incarnation of Gonzalez was particularly awful because of his big naked super caveman look. Also, no matter how thick you grow your beard, if you got a kind looking face, it’ll look kind no matter what. Despite his size, for me the sneering Gonzalez always looked like a perfectly nice guy who just happened to wear a flesh toned body suit and beat up living dead zombies. Weird life.

The big man actually did briefly turn face in the WWF, but it was not to be. His size and a worsening situation with his health required him to take some time off, resulting in his departure from Vince‘s place. He would recover enough to get through a few tours of duty in Japan, primarily working with New Japan and the WAR promotion. His last singles match was in February of 1995 against Japanese legend, The Great Muta. He would finish out his career touring with WAR working tag matches.

Jorge’s retirement was not met with much fanfare. His health continued to decline over the years, leaving him in a wheelchair and almost blind. He found peace through his farm in Argentina where he also resided, but time was certainly wearing thin.

September 22nd would be the giant’s last day on Earth. He passed away in an Argentinean hospital as a result of complications from his diabetes. Never a top tier in ring talent, Gonzalez did get something most wrestler’s do not get when they die: A quiet dignity. There would be no tales of his drug abuse, wife smacking or child abandoning because those stories didn’t exist. He wasn’t found slumped over in his bathroom, his heart finally giving out after years of steroid abuse. No, he just passed like any other person would, albeit far too young.